With Frank’s revenge well and truly gotten, the season that followed was in a great place for introspection. Instead of regurgitating the same “being a killer is wrong” and “why can’t you stop killing” dreck that permeates the Walking Dead from episode to episode, season two of Punisher got into the actual motivation behind Frank’s vigilantism. I would rather not spoil how the show approaches the subject, but if you have read my other Punisher related posts, it would not be hard to imagine.

Season two is a remarkable improvement in quality. The narrative is not convoluted with five different plots happening at the same time and settles for the standard three. First you have Frank’s story, then Jigsaw’s, and a new character named Amy, a teenage con artist on the run from a mysterious hitman. Each episode devotes an equal amount of time to each plot without feeling too bloated, but not as often as anyone would like.

I understand the demand to fill time in 13 one-hour episodes. In school, I was taught you need to not only write complete stories, but also space them out between commercial breaks. All entertainment is based around a blueprint that has worked since Man learned to draw on cave walls. Everyone follows this blueprint, but like all the Marvel Netflix shows, there is a consistent issue of each show having too much space to fill.

While the story is not convoluted, the show spends so much time on its three plotlines that it becomes a slog. Rather than compartmentalize the plots with Frank’s character exploration as a framing device in a comfortable nine episode run, we get thirteen where different elements of each plot tag-teams converge. What you get is a season that flows about as well as bowels packed with concrete. The show is still better than before, but it is a chore to watch.

Jon Bernthal remains the best incarnation of the character since Ray Stevenson. His signature intensity has made his take on Frank wholly his own and I could not be happier. However, Ben Barnes’ version of Jigsaw took me completely by surprise. Instead of a villain that is a little more deranged than your average goodfella, Jigsaw is extremely traumatized from what happened to him last season. He has no recollection why Frank slashed his face and cannot remember events up until the maiming. Jigsaw lashes out at his therapist, has constant mood swings, and endures spats of pain. He is in pieces, but as he puts it all together, he develops into a great foil for Frank’s own journey.

The action scenes received a well-deserved upgrade with more brutal, close-quarters combat. Almost every episode Frank is stabbing or smashing someone and bathing in their blood. He also never walks away unscathed, either sliced or plugged with a hole or two. It is really a credit to the character as a hero that does not care about personal injury or that he is vulnerable. Frank wants to get loud and nasty.

The downside is relegated to the gunfights. As you probably know, I am a gun owner and an Effects Nazi, and I can tell when real blanks and squibs are being used. It is hard to fake unless you have a great VFX team. On the subject of bad gun effects, the Walking Dead does not hide the fact they use fake guns because, somehow, the production could not get real guns and blanks in RURAL FUCKING GEORGIA! There are airsoft weapons that simulate blowback and/or recoil and they could not have bothered buying just a few for less than grand of budget.

Taking into account Punisher was shot in a New York, it is understandable that the best practical weapon effects could not be utilized and the show made due in both seasons. The issue with the gunfights is they are poorly choreographed. Early on no one acts like they know what they are doing. They just stand around holding rifles poorly before getting shot. Then there are scenes where muzzle flashes and accompanying sound effects are out of synch or poorly timed. Actors fall over before they are supposed to be shot or they are shot and do not fall down at the right time. Chalk it up to poor editing, but if maybe the guns functioned in a way the actors could see and hear them go off, you would not have much of a problem to begin with.

I also have a personal problem with how Frank is portrayed in the gunfights. 80% of the time he uses the same pistol over and over in a C.A.R. stance, where he is holding the gun to his face. This method works in the John Wick movies, but it looks stupid and everyone in the show does it. How about hold the gun like you are not trying to give yourself permanent hearing damage? When Frank is given a rifle it is a breath of fresh-air and adds a little diversity. In the comics he uses a variety of weapons depending on the situation, but all he has on the show is a pistol.

Lastly, and this is something I intentionally neglected to mention in my review of the first season, the Punisher costume sucks. In fact, it has sucked since its introduction in Daredevil. Nobody makes body armor like that. Not because it does not look practical, but because it looks stupid. There are exposed adjustable straps at the front, some shell loops that are not big enough for any caliber of ammunition, and there is no webbing for attachments like modern body armor.

This is kind of unfair, but if you look at this shot from the Edmondson/Gerads run of Punisher, Frank is wearing gear that works for his job. 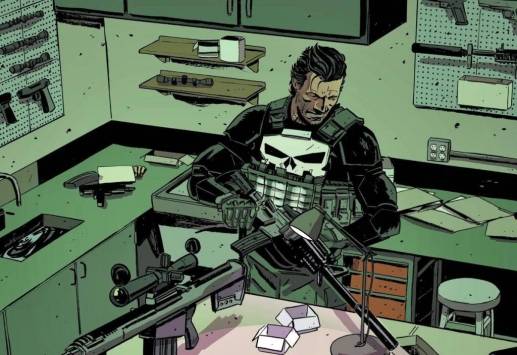 He has a plate carrier with ammo pouches painted with his signature skull and a hitcoat to protect his arms. The man is dressed practically and it looks cool because Frank makes it look cool. He is a military man that does not need fancy high-tech crap that looks like it was made by a cross-eyed cosplayer. He needs something that will keep working in hazardous situations and there is nothing more practical and foolproof than genuine military gear. I apologize to the costume designers, but if my own Punisher vest looks better than the one you made for a big budget show, it is time to go back to the drawing board.

I thought about going in depth into the pre-release controversy, where people promoting season 2 were saying one of the characters is Alt-Right, but I decided otherwise. I will say, however, the character in question played by Josh Stewart is a reformed Neo-Nazi and born again Christian. That is not Alt-Right. The Alt-Right does not give a shit about Christianity, most of them are Pagans or Atheists, and they care even less for Neo-Nazis, a catchall for gang-bangers that hate each other more than non-whites. This controversy was just manufactured outrage to drum up viewers from a demographic that do not watch these shows in the first place.

Despite the pacing issues and bloated runtime, Punisher season two is a great watch. The lapse in better action takes away from the appeal, but seeing Frank and Jigsaw’s dueling progression into who they really are was better than the best gunfights last season. If you can make it through the slog, the show is worth your time. Oh and be sure to skip over the parts with Madani because they still suck.

I am a Florida native with a keen interest in History. I am a graduate of Full Sail University in the Creative Writing for Entertainment and hope to become a novelist. View all posts by CT McMillan